Congress closed the year with a bang: Two bills, totaling more than 2,200 pages, that fund the federal government and extend various tax breaks that are important to individuals and businesses. There were lots of Christmas presents for business wrapped up in Section 179 for businesses looking to purchase equipment.
Essentially, Section 179 of the IRS tax code allows businesses to deduct the full purchase price of qualifying equipment and/or software purchased or financed during the tax year. That means that if you buy (or lease) a piece of qualifying equipment, you can deduct the FULL PURCHASE PRICE from your gross income. It’s an incentive created by the U.S. government to encourage businesses to buy equipment and invest in themselves.
Today, Section 179 is one of the few incentives included in any of the recent Stimulus Bills that actually helps small businesses. Although large businesses also benefit from Section 179 or Bonus Depreciation, the original target of this legislation was much needed tax relief for small businesses – and millions of small businesses are actually taking action and getting real benefits. Not only did the bonus depreciation and Section 179 tax breaks come through as expected, current legislation Congress just sent to President Obama extended both measures. 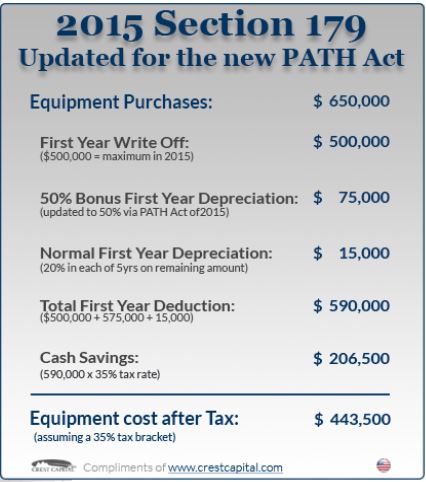 Here is how Section 179 works.

Under current legislation, the bonus depreciation is extended through 2019. This allows contractors to apply 50 percent bonus depreciation to any equipment bought during a fiscal year. For example, 50 percent of any equipment bought before Dec. 31, 2015, can be depreciated on a company’s 2015 taxes, with the rest depreciated over the remaining useful life of the equipment. The current bill allows the full 50 percent for property placed in service during 2015, 2016 and 2017, then phases down to 40 percent in 2018 and 30 percent in 2019, according to an analysis by John McClelland with the American Rental Association (ARA).

There’s better news on the Section 179 front. The Section 179 cap, which was reduced to $25,000 for fiscal 2015, not only went back up to the $500,000 cap in effect from 2010 to 2014, it was permanently extended. This section of the tax code, according to the section179.org website, allows businesses to deduct from its gross income the full purchase price of qualifying equipment bought during a tax year, instead of depreciating it over time. If you exceed a total of $2 million in annual qualifying equipment purchases, there’s a dollar-for-dollar phase out of the depreciation until it’s completely eliminated above the $2.5 million level. The Section 179 will be indexed to inflation in $10,000 increments in coming years.

When you are ready to take advantage of the Bonus Depreciation and Section 179 Tax Breaks, we are here to help you find an enhanced and innovative way to improve the converting process, and system automation in order to eliminate labor and increase profits. We have both Custom and Standard Line of machinery which can be seen at contechusa.com or on our YouTube channel or give us a call. We look forward to helping you find a solution for your production needs.